A sanctuary in the sand

The new TIRPITZ Museum is a sanctuary in the sand that acts as a gentle counterbalance to the dramatic war history of the site along the west coast of Denmark. Located in the city of Blåvand, a German foothold during World War 11, the 2,800 M2 ‘invisible museum’ transforms and expands a historic German bunker into a groundbreaking cultural complex. As the antithesis to the dark and heavy bunker, it is comprised of a public central square, surrounded by transparent, light-filled spaces and seamlessly embedded into the landscape.

Located in a protected landscape, TIRPITZ appears as a natural dune. Visitors follow winding heath-lined pathways, which transition into a fine, rigid intersection into the landscape as they near the historic bunker. Four simple incisions in the topography lead visitors to a sunken, central courtyard where they can access the four underground gallery spaces. Though carved into the sand, 20-foot tall glass facades provide an abundance of daylight into the underground spaces.

Each of the four museums is housed within its own gallery, separated by hallways and an interior central plaza. The four sides of the central space contain large rotating doors, maximizing the flexibility of the galleries. When closed, each individual exhibition functions independently and allows curators to regulate which exhibitions are available. A tunnel to the south connects the gallery spaces to the historic bunker. Here, visitors will find themselves inside of the preserved concrete bunker where an interactive light exhibit reveals how the bunker should have functioned.

The museum’s energy use is covered by 100% electricity from the grid. If we compare with the Energy Star Target Finder, regional default values the predicted percent energy reduction of TIRPITZ amounts to 23.6% better than the Design Target and 69.5% better than the average regional museum. Since Denmark uses mandatory national energy calculation programs and maximum specific energy consumption values, we take these into account as well. The museum is certified to the National Danish Energy frame system with its yearly predicted energy use of 65,3 kWh/m²year, which is equivalent to 9.3% better margin than the national energy frame.

TIRPITZ is a historical renovation of a concrete war bunker that has both transformed and expanded the site of the original artillery fortress into a museum that tells the hidden stories of the Danish west coast. The new museum brings together four cultural institutions and maintains the protected shorelands of Blåvand by camouflaging into the dunes and appearing subtly between a series of precise cuts into the landscape. The museum has welcomed more than 180,000 guests in the first six months since opening in June 2017, and which has far exceeded the average of 30,000 visitors that came annually before we built their new home. TIRPITZ has become a new landmark and cultural meeting space for Western Denmark, and in oasis in the sand dunes.

Blåvand is one of the largest holiday destinations in Denmark. Next to Copenhagen, the area has had the most holiday visits annually as visitors are drawn by the verdant landscape of peaceful dunes and heaths, and the North Sea. However, Blåvand had been missing the attraction and main information center to support full-year tourism. The new TIRPITZ museum fulfills this need with a year-round cultural center for children and adults to learn through interactive and immersive exhibition spaces. Four underground gallery spaces lit by natural daylight showcase the permanent and temporary themed experiences, each designed to its own rhythm and beating in sync with the storyline. From the sunken galleries, visitors are able to walk into the historic bunker and play and reflect on the history of an impressive war machine. Since TIRPITZ opened to the public in June 2017, it has welcomed more than 180,000 guests in the first six months – this has far exceeded the museum’s average of 30,000 visitors that came annually before we built their new home. TIRPITZ has become a new destination, attraction and cultural meeting ground for Western Denmark, and stands as a peaceful oasis among the sand dunes.

TIRPITZ is a historical renovation of a concrete war bunker that both transforms and expands the site of a 1940s artillery fortress into a museum that tells the hidden stories of the Danish west coast. The museum sets precedence for how a massive fortification of a darker past can become a beacon of light as the new landmark and cultural meeting space for the region.

TIRPITZ was developed and constructed in close communication with our collaborators, users and members of Varde Museums. The director of Varde Museums Claus Kjeld Jensen had two goals for BIG to achieve: create a humble, world-class attraction for western Denmark while also surprising visitors with new perspectives on the majestic landscape. TIRPITZ has achieved these goals both outside in integrating with the landscape, and inside in our collaboration with exhibition designers Tinker Imagineers to bring wondrous and playful exhibitions that enhance the museum experience.

The new museum brings together four cultural institutions while maintaining the protected shorelands of Blåvand. Outside, there is the value of preserving West Jutland’s field of sand dunes and beautiful meadows stretched into the furthest distance. TIRPITZ camouflages into the dunes by appearing subtly between a series of precise cuts into the landscape, thus leaving the environment uninterrupted and preserved in its peaceful state. To counterbalance the monolithic object of the bunker – a dark and heavy object of war – the new museum is its polar opposite. TIRPITZ appears as a light, open space sunken like a sanctuary in the sand – an architecture of absence rather than presence. Within, TIRPITZ is the renovation of an abandoned war artifact that has transformed into a contemporary exhibition complex, revealing the treasure trove of stories hidden in this corner of Denmark.

TIRPITZ’ structural feat is in its ability to stand column-less using a self-supporting system of walls and large glass panels. The structural solution consists of a series of four, single-story rectangular concrete boxes that are half submerged into the coastal landscape. The concrete walls of these boxes are arranged such that the two walls are at right angles to each other and the roof is supported along only two edges. As well as supporting the roof, the walls act as earth retaining structures and face outwards from the center of the site. One of the main features of the building are the large glazed elevations which form the internal walls of each box. In order to accentuate the sense of transparency, it was important that these elevations were kept free from structural elements such as walls or columns. This is achieved by forcing the roof to cantilever from the walls at the back of the box and extending them to the glazed elevations without the need for further support. (See below Additional Information PDF for more details). 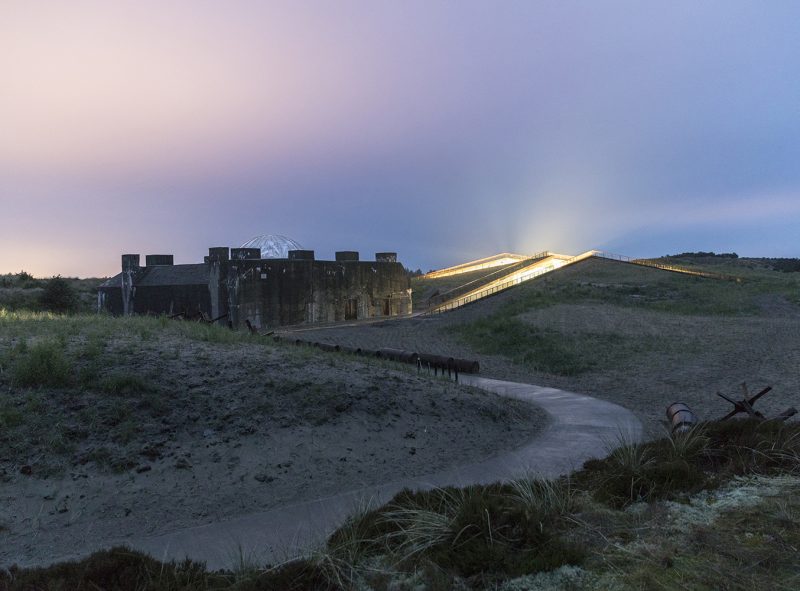 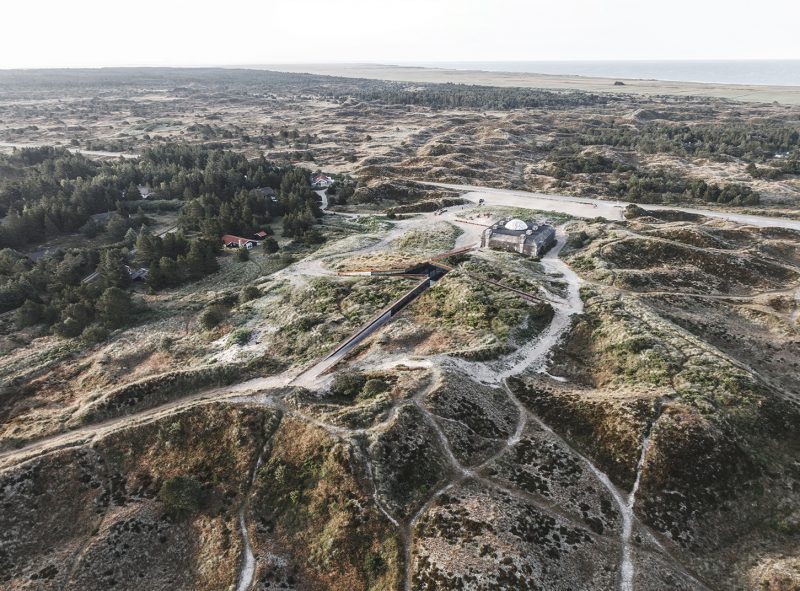 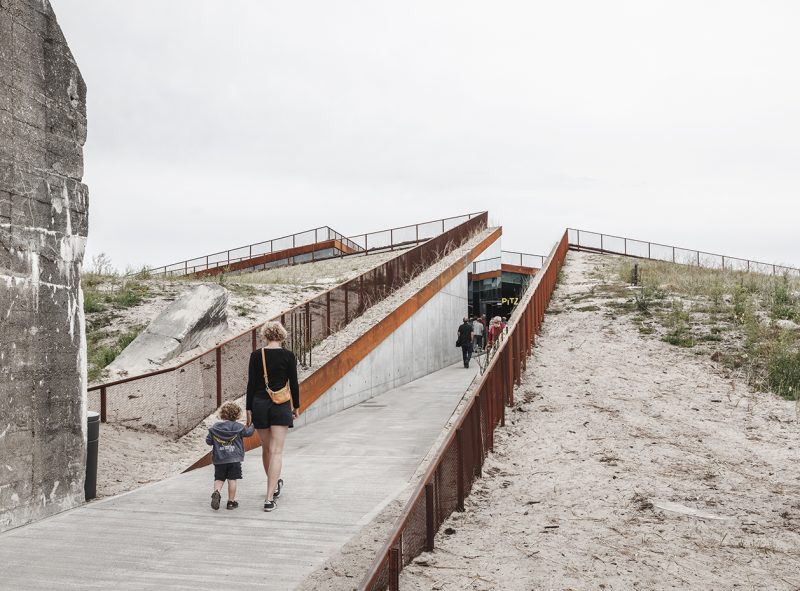 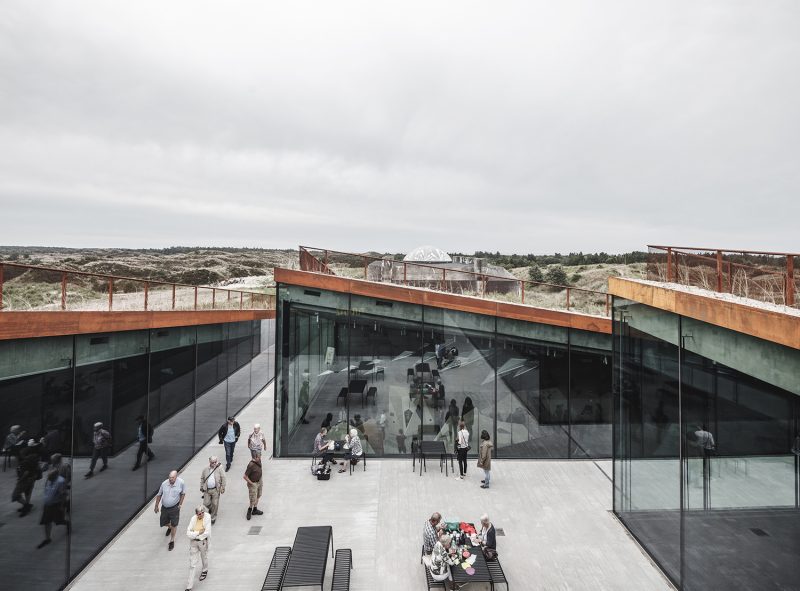 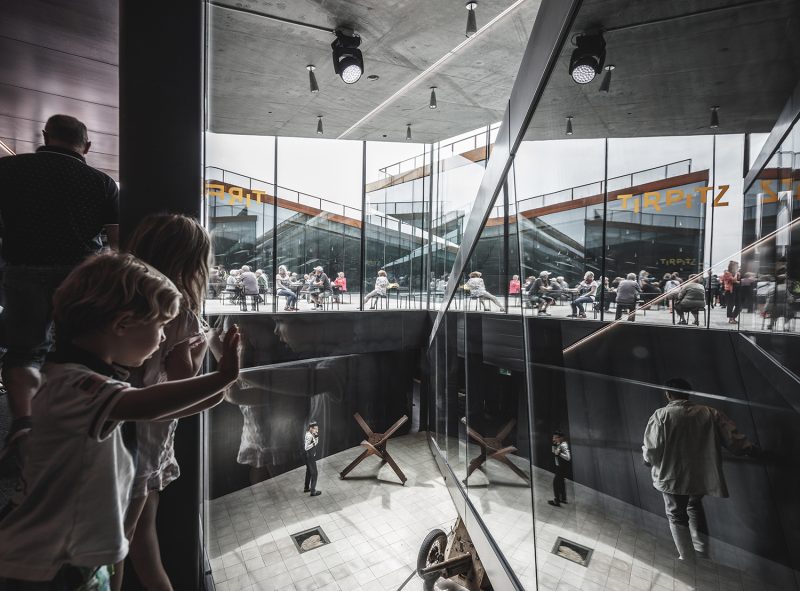 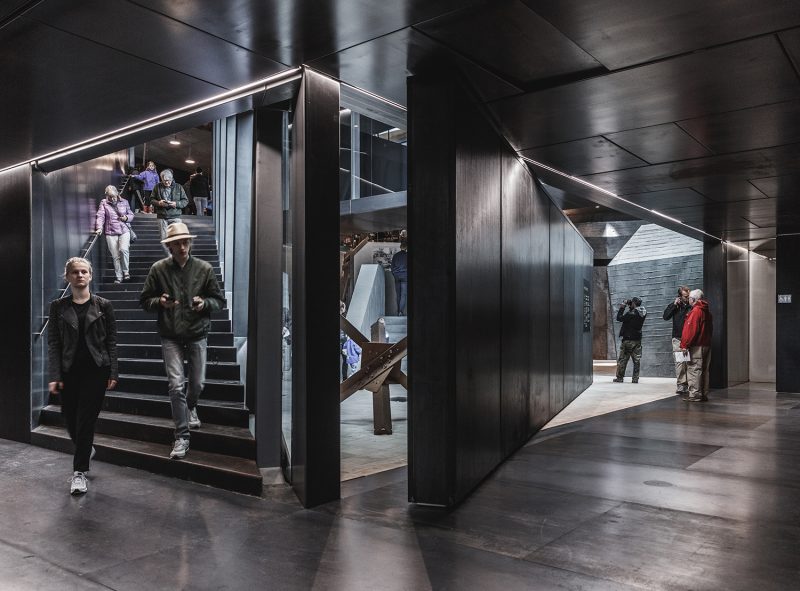 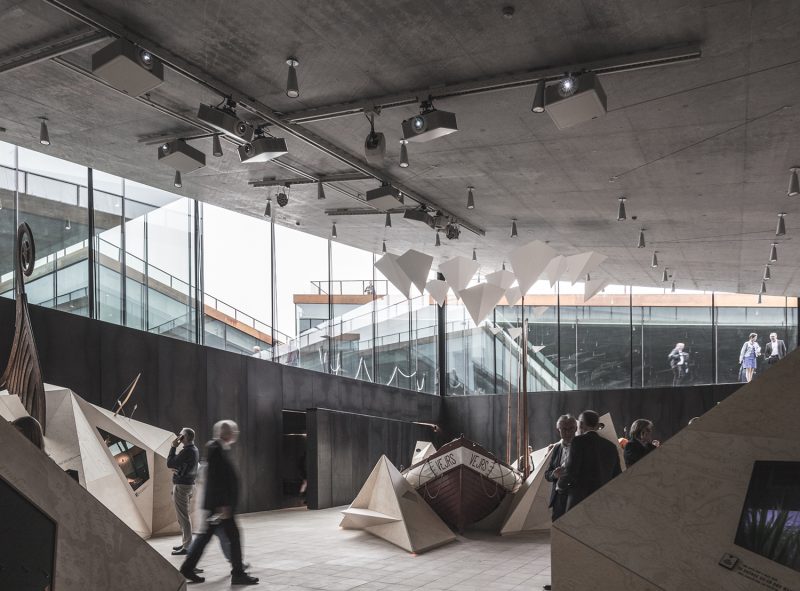 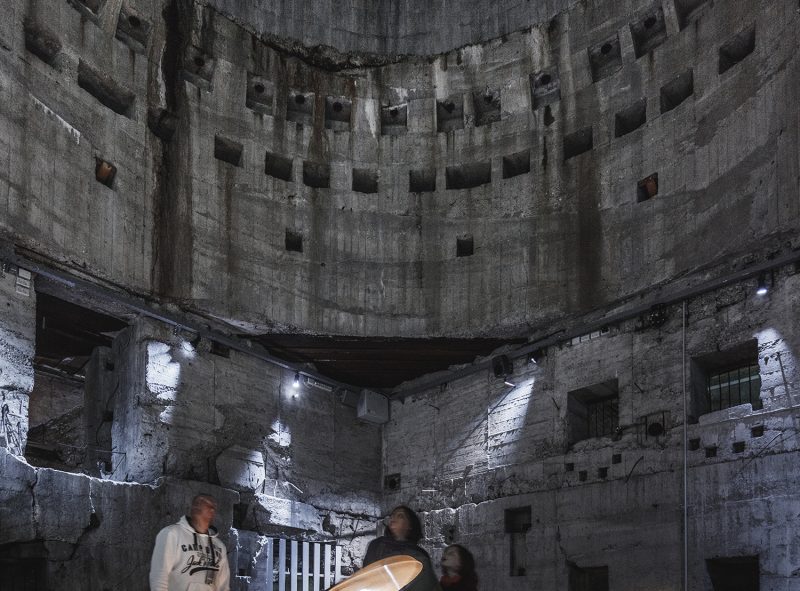